Redemption’s relationship with the films of Jean Rollin and with Rollin himself goes back to 1992 and the very beginning of Redemption when we started out as a company that would specialise in releasing European horror and exploitation films at a time when no one else was. At this time Rollin was virtually unknown and his work dismissed by most critics who had watched his films as both nonsense and nonsensical. 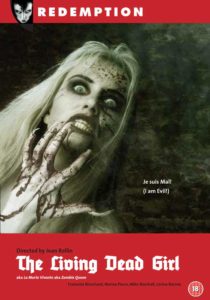 There were a few Rollin champions out there, most notably the writers Alain Silver and James Ursini whose book ‘The Vampire Film (1975) extensively referenced Rollin, the essential reference book, at least pre-internet, Phil Hardy’s Aurum Horror Encyclopedia (1984) and David Pirie, whose defining book on vampire cinema (1977) devoted copious pages to Rollin and featured a series of amazing stills from his films, images which for many were to be their first, and until, Redemption’s releases, only example of how extraordinary Rollin’s visual power is.

In fact, it was those stills in Pirie’s book, coupled with the fact that numerous horror writers in fanzines were discussing Rollin on the basis that virtually no one reading their articles had actually seen a Rollin film, which was the deciding factor in our decision to seek Rollin out and to license his films.

Redemption’s first release was Requiem for a Vampire, followed quickly by The Nude Vampire, Shiver of the Vampire and, after some mastering issues, the Living Dead Girl. This was in 1993 and early 1994 but it wasn’t until we negotiated with Rollin to acquire all rights in his films worldwide in 1997 that we began remastering his films digitally for release on the then new format of DVD and enabling people for the first time to see Rollin’s work in all its glory.

These digital versions sufficed until the arrival of Blu-ray necessitated a new upgrade into High Definition, which, due to our new distribution deal with the US company Kino Lorber, we were able to do. This meant that over the course of a few years we were able to release the majority of Rollin’s catalogue in versions that equalled or surpassed their original theatrical versions making his work more accessible than ever.

Now in 2018, we are upgrading again with Rollin’s incredibly underrated film Dracula’s Fiancée being remastered beautifully into 4K, with other Rollin titles following.

We are not stopping at this though and for Rollin fans the next few years promises to bring a whole slew of treats and surprises all of which will be covered here on our new dedicated Rollin section first.

Coming here soon a history of Rollin on film, in print, on vinyl, CD and on video, laserdisc, DVD and Blu-ray as well as anecdotes on the great man himself as well as the actors and actresses who brought his unique visions to life.

The Critics View of Jean Rollin

“Jean Rollin was definitely one of a kind. He was at the front of a wave of filmmakers who took horror genre conventions and used them as a point of departure into other, sometimes far deeper, realms of thought and expression.”

The films of Jean Rollin get further recognition

A new book, with the rather convoluted title, Desire After Dark: Contemporary Queer Cultures and Occultly Marvelous Media, has just been published by Indiana University Press. Written by Andrew J. Owens it explores media where [...]

Rare and OOP Schoolgirl Hitchhikers single to be reissued.

The good people at Finders Keepers Records have agreed with us to reissue the fab Jeunes filles Impudiques aka Schoolgirl Hitchhikers single featuring music from the film by Pierre-Raph. The original release sold out several [...]

In a welcome sign of Rollin’s widening popularity, CRX, an LA-based band formed in 2016 by Stokes’ lead-guitarist Nick Valensi, have cited Jean Rollin’s vampire films as inspiration for the video released to promote [...]

A major retrospective in New York and BFI screenings in London

Jean Rollin’s, slow but inexorable rise to mainstream acceptance continues with two major theatrical screenings of his work, one in London and the other in New York. In London, the UK’s prestigious BFI (British Film [...]

UK newspaper, The Daily Telegraph, recently compiled a list of the best 50 'great films you (probably) haven't seen' and listed at No 31 is Jean Rollin's fabulous and gory science fiction thriller, Night [...]