Farewell to a King

On Monday 30th November our much loved, long coat Chihuahua Eddie died suddenly, after a very short illness. There was nothing the vet could do, and after nearly 15 years this wonderful and eccentric little Chihuahua was gone. I wanted to write something to mark Eddie’s passing as he was often mentioned in posts on Redemption, sometimes jokingly referred to as a rare breed of ‘Siberian Wolfhound’, and was often pictured on our social media posts and in the credits of the FAB Press reissue of ‘The Art of the Nasty’. In real life, Eddie made regular appearances at Redemption’s offices in Charlotte Street and in various clubs and restaurants, including at the Soho House where he came very close to being honoured with his own membership card.

Eddie was born on the 20th March 2006 and came via Harrods in the days when it still had a pet department. His birth name was Billy Whizz Kid the Third. This meant that Eddie was used to being around people, indeed he had been separated from the other Chihuahua puppies because he kept biting them! The girls in the pet department also took turns to take Eddie home every night on the tube so he was accustomed to being carried around in a bag and travelling in a crowded carriage surrounded by commuters. This meant that by the time he arrived with us Eddie’s behaviour was bizarre, even by Chihuahua standards.

Simply, Eddie didn’t know he was a dog. During his time at Harrods (where he was isolated from other dogs, and stroked and fawned over by hundreds of people a day), Eddie had evolved his own unique way of dealing with the world, people, and its most precious commodity, food. Food for Eddie was an obsession, and once acquired was then itself the subject of a complicated Ritual that had to be performed before the food could be eaten. The only exceptions to this was food acquired ‘on the go’ when the environment precluded rituals or stolen food which had to be consumed immediately. The most dangerous and problematical for us was when food, bag and outside environment coincided and Eddie decided to perform The Food Ritual in public.

Before I describe The Ritual, I must also explain to non-dog owners and non-long coat Chihuahua owners in particular, that getting permission to bring in a dog, even one that was gorgeously cute and in a bag, to nightclubs, members clubs, restaurants and shops was a major achievement. Once agreement had been reached Eddie’s behaviour had to be impeccable and ideally he would spend the next few hours asleep in his bag.

The Ritual – With most dogs, if you give them a bite-size piece of meat they eat it, if you place a bowl of food in front of them they eat it, quickly; this was not the case with Eddie. Regardless of whether you gave him a piece of meat or dried food, before eating he would either throw it around the room and bark at it, lie down on his side and bark or growl at it, throw it around some more or place it in between his two front paws and then bark and slam both paws down at the same time, repeatedly. Often The Ritual involved variations of all three techniques and could last for ten minutes or more. Only when The Ritual had been completed would Eddie eat. In later years Eddie added to The Ritual by introducing a daily, pre-Ritual barking session exactly ten minutes before the main Ritual began.

If Eddie decided to perform The Ritual in his bag, in public, things could get spicy; as performances in a confined space often resulted in a considerable amount of muffled noises, strange movements and the bag falling onto the floor, with Eddie emerging in a state of considerable excitement. Yet Eddie was generally welcomed and, given his people skills learned at Harrods and then perfected at dozens of establishments, Eddie was a natural bon viveur and dog about town, able to work a crowd like a seasoned player. This gained him access to everywhere from Daphne’s and L’Etoile in Charlotte Street (where we were told the last Chihuahua they had let in had belonged to Lauren Bacall), through to Soho House, Century and on one memorable occasion the Slimelight in Eddie’s Goth phase. He was also a regular at Selfridges and the shops of Bond Street, where he would often put on impromptu performance art pieces by barking at himself in any available mirrors.

Eddie was fearless of people in the sense that he had no sense of danger whatsoever. Left to his own devices Eddie would just walk off without a care in the world and assumed that every human would just love him and most did. Over the years Eddie wandered off in Primrose Hill, Regents Park, Marylebone High Street, St Christopher’s Place, and excitingly in Joe Allan’s restaurant; where he was spotted by staff heading for the kitchens having sneaked out of his bag and somehow walked through the entire restaurant unseen.

Eddie’s fluffy gorgeousness also saw him get several modelling jobs in his younger years where he modelled a range of high-end jumpers and accessories. Then, in 2014 Eddie played a role he was born for, that of King Edward SnapJaw in Game of Bones, a spoof tribute that we put together ahead of the launch of Game of Thrones Season 4. Eddie was photographed in various heroic poses for a series of posters and an animated trailer and, of course, he looked suitably magnificent.

Eddie was so much more than a little dog, he was a King. 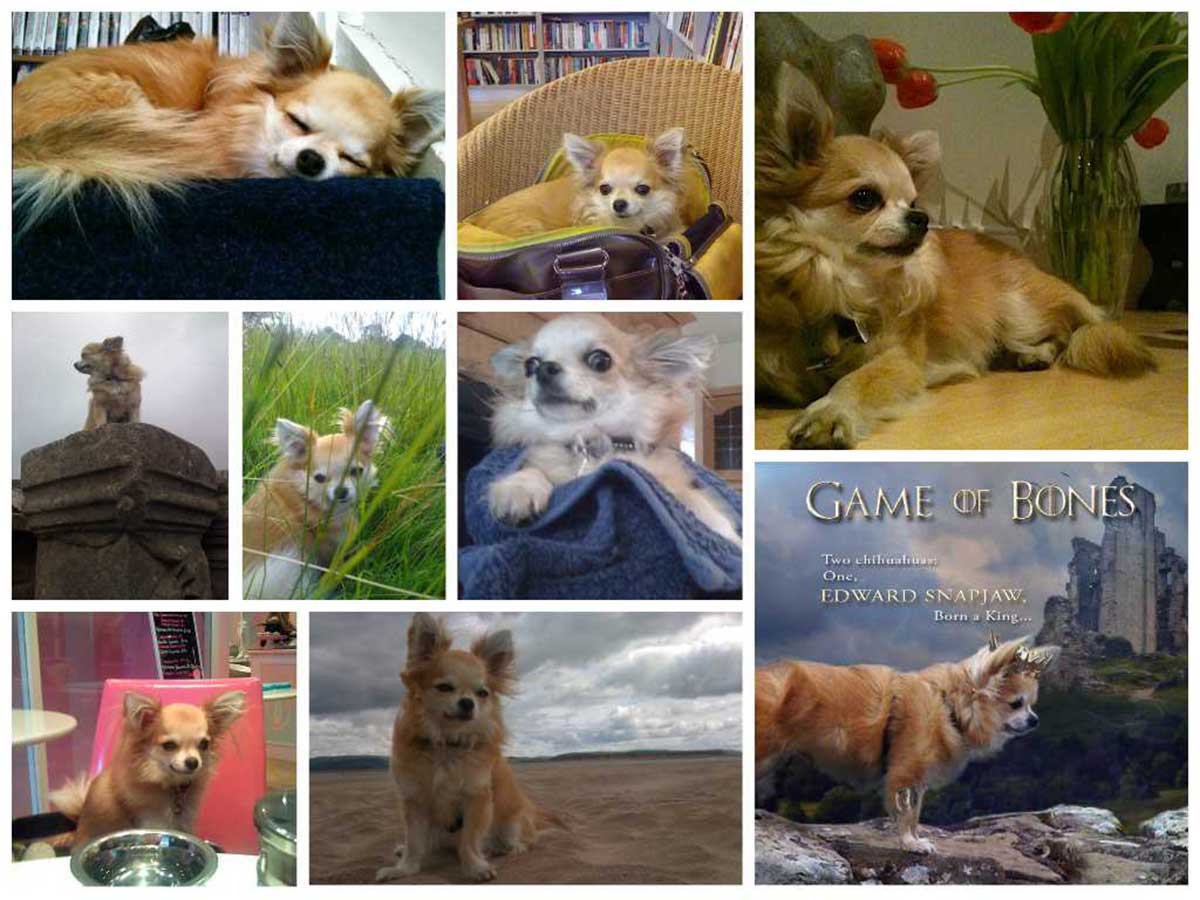