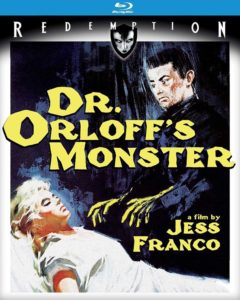 Two great Blu-ray’s have just been added to our shop. First off the chopping block is our own Redemption release of Jess Franco’s dark and gothic classic Dr Orloff’s Monster aka The Mistresses of Doctor Jekyll which includes a great audio commentary by Tim Lucas.

Separately we’re stocking the classic remastered release Revenge of the Blood Beast by RARO. Directed by Michael Reeves (Witchfinder General) and starring the amazing Barbara Steele. It is fantastic to see this ultra gothic tale of revenge and witchcraft finally remastered properly and released on Blu-ray.