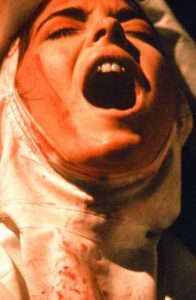 Visions of Ecstasy (1989), the experimental short film loosely based on the writings of the 16th Century Carmelite nun Teresa of Avila, and banned for nearly 25 years on the grounds that its content ‘outraged the dignity of Christ’, is to be made available online via the BFI’s new online subscription service. The subject of an unsuccessful seven year legal challenge against the BBFC and the UK Government to have the ban lifted, Visions of Ecstasy was eventually un-banned after the UK law of blasphemy itself was abolished in 2008.

Visions of Ecstasy will be listed and available to view in the BFI’s ‘controversial’ film section alongside Luis Buñuel’s Un Chien Andalou (1928) and Barbet Schroeder’s Maitresse (1976) – fine company indeed!