Skip to content
Home/Blu ray, Horror/Zombie Nazis’ for Christmas! Or how the New York Times turned Alt-Right into Alt-Rollin!

Zombie Nazis’ for Christmas! Or how the New York Times turned Alt-Right into Alt-Rollin!

Amazingly Jean Rollin’s exploitation classic, Zombie Lake, in which a group of dead Waffen-SS soldiers whose bodies had been dumped in a lake after they were killed by resistance fighters in WW2, come back to life as zombies, is suddenly the must-see film for Christmas!

It seems that the New York Times, having decided to google Christmas films, found inexplicably that Jean Rollin’s Zombie Lake was favourably listed. This caused the New York Times to analyse Rollin’s classic for signs of snow, santa or the baby Jesus, but finding instead bathing naked girls and sex-and-blood-crazed zombie nazis, made it into an issue!

So if you fancy watching something other than It’s a Wonderful Life this year then please add a copy of Zombie Lake to your Christmas list. 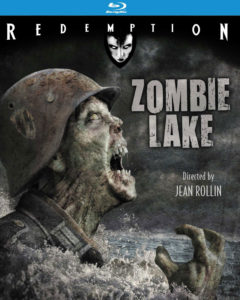